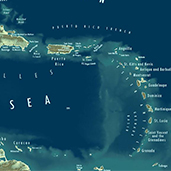 As the Biden-Harris team takes office at the helm of the world’s most powerful democracy, the new Administration’s proposed foreign policy gives new hope to a turbulent world which over the past four years was confronted with American policy that was unpredictable, if not bizarre and which was often seemingly formulated and conducted by tweet and not tradition. Often neglected in the past by the United States unless a threat is posed to American interests especially by Russia and China, the Caribbean region looks forward to heightened and more meaningful engagement with the administration of President Joe Biden and Vice President Kamala Harris. 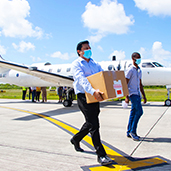 India’s Foreign Ministry says it plans to supply vaccines -- mostly free of charge -- to 49 countries in Latin America, the Caribbean, Asia and Africa. So far, the country has distributed 22.9 million doses under its “Vaccine Friendship” program. On Thursday, Dominican Republic Vice President Raquel Pena said that India had donated 30,000 doses to her country. That’s on the heels of 100,000 doses India donated to Barbados and the 70,000 doses donated to Dominica earlier this month. In a text message Saturday, Barbados Prime Minister Mia Mottley said 12,000 people had been vaccinated on the island, mainly the elderly and those with chronic illnesses.

The World Bank’s focus on a cross-cutting approach for building resilience in the Caribbean is more important now than ever.

The World Bank is swiftly supporting the efforts of Latin America and the Caribbean to address COVID-19-related impacts, through new operations and by redirecting funds from existing projects. visit this page.

Saint Lucia - On January 14, the US$30 million Saint Lucia COVID-19 Response, Recovery, and Resilience Development Policy Credit was approved. This financing will help the government to enhance the capacity of the health sector and provide short-term relief to the poor, small businesses, and severely affected workers.

Trinidad and Tobago - The World Bank approved US$20 million for a project that aims to respond to the COVID-19 pandemic and strengthen national systems for public health preparedness. The financing will support procurement of key medical supplies needed for testing and diagnosis, inputs for infection prevention and control in health facilities, and personal protective equipment for staff.


Financing for COVID-19 response has been provided in the following countries: Dominica, Dominican Republica, Grenada, Haiti, Saint Lucia, Suriname, and Saint Vincent and the Grenadines. Preparation of support for Belize and Trinidad and Tobago is well advanced.